Home>A Charming Region with Variety and Style>Attractions>Hsinchu>Hsinchu City God Temple
Hsinchu City God Temple
A+ A-
Hsinchu City God Temple is a level-three historic site located on Zhongshan Road in the downtown North District neighborhood. Being the largest temple at the time when it was completed, the City God Temple has been a major religious attraction which draws long trains of worshippers from around Taiwan, hence the saying “Hsinchu City God, Beigang Mazu Goddess.” Worshipping the only provincial city god in Taiwan, the temple draws flocks of people during the Lantern Festival. Beautiful lanterns and crowds weave into a picture filled with bustling noise and excitement. The annual procession of the City God on the Ghost Festival further attracts innumerable believers from around Taiwan, resulting in the flourishing of the night market in the front yard and around the temple. The night market enjoys high popularity among local residents. As a result, it is always crowded at the market in the evening and on holidays. The long line in front of stores and shops has now become a distinguishing feature of Hsinchu city. The must-try food includes rice noodles and meat balls. Other famous street foods you should not miss are “run bing” (a rolled up burrito-like snack), Taiwanese meatballs in wine sauce, meat thick soup, steam cakes, etc. 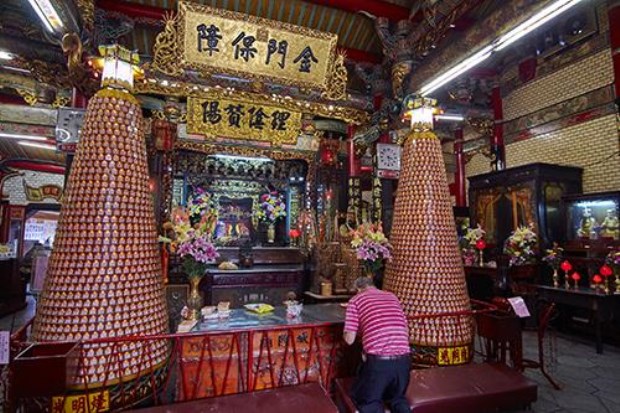